Why a Site Celebrating Hello, Dolly?

In January of 2016, plans were announced to bring the long-running, Broadway hit Hello, Dolly! back to Broadway the following spring, with Bette Midler set to star as the determined matchmaker first created by Thornton Wilder and memorialized in music by Jerry Herman.

When I first considered creating this site, I made sure nobody had done anything like it. This site

includes the oral stories that illustrate the evolution of artist and show coming together. Those that I have interviewed have shared their experiences and the experiences of those they have worked with. I’m also creating this to let future generations know about a time in show business that no longer exists and about how the business has changed. The experiences of past and present artists are essentially the same…from audition to getting the part or job and maintaining excellence throughout a run.

Other Dollys: Success or Failure?

Depends upon whom you talk to! Hollywood’s Dolly: Barbra Streisand:  Was/Is she a success or 'failure'? The history of this show has not always been easy-through many successes and failures over the 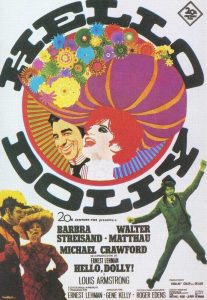 First produced by David Merrick in 1964 it has become an enduring and endearing international hit. Famous Dollys include Carol Channing, Mary Martin, Pearl Bailey, and most recently, Bette Midler. Carol Channing 1964 Carol Channing 1964 The original production was the winner of 10 Tonys and the current Broadway

production 4, Dolly is full of the complications of love, the largest complexity belonging to Dolly Levi and Horace Vandergelder. By play’s Dolly's original leading men: David Burns (Horace), Charles Nelson Reilly (Cornelius), Jerry Dodge (Barnaby) Dolly’s original leading men: David Burns (Horace), Charles Nelson Reilly (Cornelius), Jerry Dodge (Barnaby) end Horace realizes life would be dull without her and she promises she’ll “never go away again.” The current revival has won critical praise, earned 10 Tony nominations (one shy of the original production) and broke the box-office record for first-day ticket sales. The top ticket price of $748 is second only to “Hamilton” and its $849 premium seats. The 2017 revival of Hello, Dolly starring Bette Midler, produced by Scott Rudin, choreographed by Warren Carlyle) directed by Jerry Zaks) has been the most ballyhooed and also highly anticipated show of the 2017 Broadway season. It officially opened April 20 at Broadway’s Shubert Theatre after a month of previews. With an advance sale of nearly $40 million an idindividual tickets being sold for what is a month’s rent for some, I was fortunate to have been invited by a dear friend for opening night. The show went on to win four Tony Awards (Best Performance by an Actress in a Leading Role in a Musical for Bette Midler, Best Revival of a Musical, Best Performance by an Actor in a Featured Role in a Musical for Gavin Creel, and Best Costume Design of a Musical for Santo Loquasto). Two-time Tony winner Donna Murphy returned to Broadway June 13 taking center stage as Dolly on Tuesday evenings.

Jerry Zaks has known major Jerry Zaks, Tony nominee for his direction of "Hello, Dolly!" with Bette Midler. "It's a really sweet moment for me," Zaks said of his first nomination in two decades. His Tony Award nomination for “Dolly” is his eighth (the award went to Christopher Ashley, Come From Away) , but he has already taken home four Tonys for such 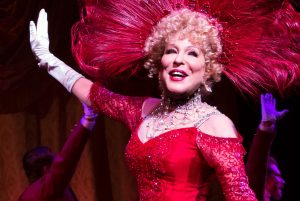 shows as the 1990 production of “Six Degrees of Separation” and the 1992 revival of “Guys and Dolls.”

“There are very few individuals who know more about Dolly Gallagher Levi than I … Oh, and Jerry Herman, of course. However, Richard Skipper certainly comes close. When it comes to the history of Jerry’s brilliant production, beyond the 5000 plus performances of my own, even I turn to Richard Skipper when I have questions about the remarkable ladies who followed me in the role that the world fell in love with over 50 years ago. From the world’s second Dolly, Carole Cook, to the original Broadway production’s last Dolly, Ethel Merman, and all of those talented ladies in between.

Pearl Bailey, who made the role of Dolly her own, Phyllis Diller, who has often been mistaken for me and I her, and Eve Arden, who wore the exact same size as I and stepped in for me so I could film Thoroughly Modern Millie.

Oh, and don’t forget JoAnne Worley, who so patiently waited in the wings as my standby and did such a remarkable job of it when she eventually donned Dolly’s red gown for herself. Dolly is America’s Hamlet and should be treated with the same respect and played by everyone.

I am so glad that Richard has taken the time to chronicle the history of the Dollys. 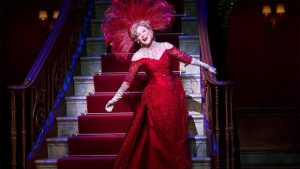 With Bette Midler returning to her musical roots in Broadway AND the first major revival of this show (excluding returns to Broadway with Channing and Bailey), what better time than now to celebrate this landmark musical?

It is such an important part of our rich musical theater history. Call on Dolly: from Carol to Bette is a celebration of the wonderful women (and a few good men) who have returned time and time again to the Harmonia Gardens and into our hearts. Channing related a quotation by Sir John Gielgud to TV host Charles Osgood: “You Americans forget your classic characters–I do Hamlet every fifteen years or so. You should continue to do Hello, Dolly! Your contribution to American art form is the American musical comedy– musical theatre.” And Walter Kerr offered that Carol Channing is “the only creature extant who can live up to a Hirschfeld.” Call on Dolly: From Carol to Bette is based on over 700 interviews that Richard has conducted regarding the various 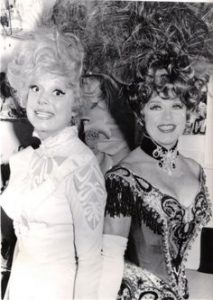 productions and those lucky enough to share the experiences of working with these legendary ladies. On March 25, 1987 Jerry Herman told Variety: “I don’t want Carol Channing’s performance to be lost…. Can you imagine not having the opening night of Carousel or of South Pacific? ” He repeated this in correspondence dated November 8, 1990, on the occasion of Mary Martin’s passing: “Unfortunately, we weren’t even sneaking video cameras into theaters all those years ago.” He lamented the loss of Merman, concluding: “I miss her a lot and now that Mary and Pearl are gone my list of Dollys grows shorter every year.” Call on Dolly, refers to the opening song of Hello, Dolly and is not just about the show. It is about an entire “family” of actors and theater professionals who share this common bond.The foreword is graciously provided by the original Dolly, Carol Channing.

From 1964 until 1970, Carol Channing, Ginger Rogers, Martha Raye, Betty Grable, Pearl Bailey, Phyllis Diller and Ethel Merman would put their individual stamp on a star vehicle which we will never see the likes of again.

Through the genius of David Merrick’s producing and marketing savvy, by constantly rotating his leading lady, and in the case of Pearl Bailey, an entire company, he was able to keep the show a vital part of the Broadway scene for seven years…even as shows such as Hair and Jesus Christ Superstar were arriving upon the scene. During the course of the Broadway run, Carole Cook led the Australian company. Mary Martin led the international tour (which included Japan, Vietnam, and London).

There were also various companies traveling throughout the US

There is also the film Wall-E with an incredible homage to the film, Hello, Dolly!

There were regional and summer stock companies led by some of the greatest leading ladies in show business. The original Broadway run (January 16, 1964, at the St. James Theater through December 27, 1970, after 2,844 performances) occurred amidst the historical landscape of the 1960s, including assassinations of the President of the United States, Robert Kennedy and Dr. Martin Luther King, Jr., the Vietnam War, the Watts Riots, AND the way the world listened to popular music when the Beatles hit American shores, also in 1964! This show was the antithesis of what was going on in the world at that time. 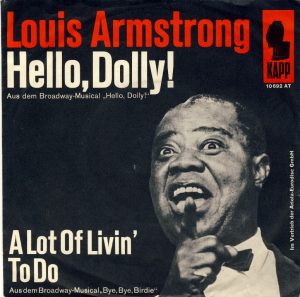 When Louis Armstrong recorded Hello, Dolly in 1963, he became the oldest act to top the US charts when his recording reached number one in 1964 knocking the Beatles clear off the charts!

Hello, Dolly, with lyrics and music by Jerry Herman and a book by Michael Stewart, was based on Thornton Wilder’s 1938 farce The Merchant of Yonkers. Wilder revised and retitled The Matchmaker in 1955.

When that became the musical Hello, Dolly, in 1964 history was made.

Hello, Dolly surpassed the success of the original source material. 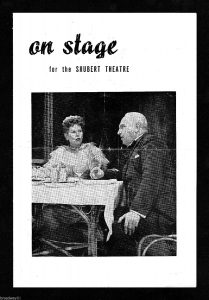 The Theatre Guild and David Merrick had presented Ruth Gordon as Dolly Levi in 1955′s The Matchmaker. Nine years later, thanks to the chemistry of the Messrs. Stewart, Champion and Herman– and most especially Carol Channing– a new dimension was brought to the character.

Thornton Wilder had told Carol that he had re-written The Matchmaker for thirty-six years and yet never got it as desired until Michael Stewart, Jerry Herman and Gower Champion brought it to the musical theatre. The story continues to be fascinating to many because of the vibrant personalities associated with the production from Carol Channing to Sally Struthers and beyond. 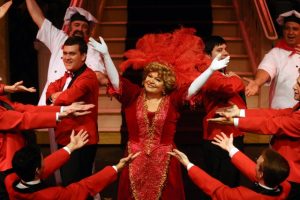 The Goodspeed Opera House had a highly successful SOLD OUT run starring Klea Blackhurst as Dolly Levi opposite Tony nominated Tony Sheldon as Horace Vandergelder . This celebration obviously didn’t stop with the curtain going down on Ethel Merman that long ago December of 1970.

The show keeps on giving. There are productions of

Hello, Dolly in regional theatres and high schools on any given day of the week. It is still one of the most sought out productions in regional, community, stock, and even in high schools and colleges! The stories and experiences of those who are part of this legacy show the vast changes in the entertainment world over the past fifty years and will be hopefully enjoyed by theater professionals and fans for years to come. In closing, it was my love of Carol Channing that led me to performing as her in the first place. The icing on the cake was not only becoming a close friend of her and her last husband Harry (even staying in their home!), but becoming friends of her allies and co-stars and friends. Getting to know these co-stars, especially from Hello, Dolly! led me to the desire to archive their stories in this website, and eventual book. 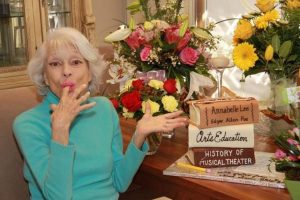 These experiences of the theater should be remembered by new generations, especially since the theater and how it is performed and perceived is constantly evolving. We will NEVER see that kind of theater and dedication to a particular role ever again. I want the legacy of ALL of the players both on and off-stage to be remembered.

I feel on some cosmic level that I will carry that mantle forward to future artists and theater-goers alike. I do miss performing as Carol but it was time to move on, but who knows?