Marky Bey is an African-American TV and film actress of the 70s. She starred in Sugar Hill and had a recurring role on Starsky and Hutch. At the time of Hello, Dolly, she spelled her name with an "I”.  Marky's nickname as a child was always Marky, short for Marqueeta. She used it starting with her career in Philadelphia at 15 .She was later talked into  Marky with an "i" because it was more 'feminine'.  Later , she just said, screw it...she was 'going out' just like she 'came in'.   So she changed it back to the original spelling.
In 1967, she was working as a singing waitress at the Improv
and heard about auditions for Hello, Dolly starring Cab Calloway and Pearl
Bailey through the grapevine.
She went to the auditions and got cast for the
chorus and to understudy Minnie Fay. She also played Mrs. Rose. How did she
approach the part? For weeks, Pearl Bailey had her walking in and out of her
dressing room saying:”Well, well, well, look who’s here, Mrs. Levi.”
If she were given the opportunity to go back, Marky would not change a thing. On the  dark night when it was their company’s turn to perform for all the other Equity houses, she got great applause doing Mrs. Rose crossing that stage at the St. James Theater. Marky brought a style that was all her own, her own freshness of delivery. She didn’t continue to tweak her performance after the show opened. Marky’s thoughts on Pearl Bailey are that she was an artist, a DIVA, a master of comic timing, a teacher, a “second mother” as she signed her book to Marky.
There was never a time when she did not own the stage she was on. Marky fell in love watching Dolly/Pearl’s entrance down the stairs into the Harmonia Gardens each show for the title number and the eating scene with Horace that followed it.
For most in this company, they were in their early twenties and it was their first encounter with “Celebrity Royalty.” There were ups and downs for some, Marky included.
Initially when Marky was cast, she was intimidated at the thought of playing opposite a star of Pearl Bailey’s magnitude. It was the “celebrity royalty” thing.
After playing Minnie Fay in one of the National Companies and replacing Chris Calloway as understudy in their Broadway company, Marky learned to trust herself and stand tall on her legs of confidence. Marky does place Hello, Dolly in her top five list of her career. She places that along the revival of Lost In The Stars with Brock Peters at The Imperial Theater. That was the show where she met and is still married to the love of her life, Don. If she could go back with the knowledge she has now, she WOULDN'T WALK IN AND OUT OF PEARL BAILEY’S DRESSING ROOM DOOR SO MANY TIMES!!!!! (Smile)

In actuality, she wouldn’t do anything differently.

Being in Hello, Dolly pivoted Marki towards feature films
and episodic television. The one thing that she learned with her involvement
with doing Dolly that she has carried forward with her since then is
confidence. This production of Hello, Dolly! was unique. They were the FIRST all black company of Hello, Dolly! Not only did they reach the inquisitive white theater going community, but now the black community became even more engaged.
Their company consisted of a bouquet of black performers, Pearl Bailey used to refer to this as her flower garden, from the very light in skin color to the very brown.  They were MARVELOUS!!!!!
Marky’s worst experience with the show happened one
performance as the scenery was coming in for Put On Your Sunday Clothes.
The scenery “grabbed” her hat and knocked it off. Her hair was in pin
clips and small pink curlers, and she was headed for the downstage front row of
the number! She faked a faint before making the turn and they got her off stage
so as not to interfere with the number! 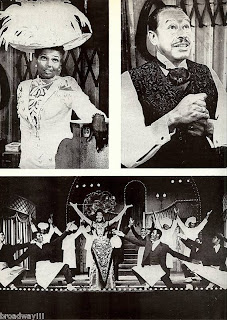 They took her to Pearl Bailey’s dressing room and gave her “poppers” (for her heart!). It was one of her most memorable acting moments! It was not uncommon for Marky to have terrible
experiences during a performance of Dolly. Minnie Fay’s Harmonia Gardens hat,
for example.  It was a large pink question mark shaped feather atop the hat.
Marky was seated and bent over to put it on during intermission, and the wire
at the top of the feather went in the inside of her upper thigh inches away
from, well, just use your imagination…She couldn’t get it out, and they had
only five minutes before curtain. It was their beloved stage manager, Frank
Dudley, who performed the ultimate extraction.  And the show went on…
Marky also saw Carol Channing play Dolly. One would think she could never be replaced. She never was… She really OWNED Dolly. Marky saw her again many years
later in Pasadena when lines were forgotten, but if Marky had not been in the
show she would never have known…overwhelmingly supported by the audience with
rounds of applause initiated by her biggest fan and loving husband, Charles
Lowe. 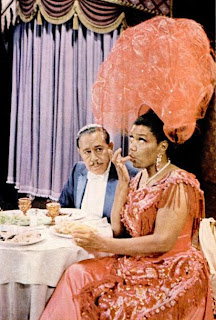 The only “tailoring” that Pearl Bailey made to the script
was the eating scene between her and Cab Calloway. It was a priceless piece of
comic art, especially with the “sopping of her plate and his.” It brought the
house down every performance. It has been written about many times here, Pearl
Bailey’s “third act.”
In hindsight, Marky is sure the cast members would have appreciated it more if they hadn’t  had
to stand there for  an additional 20 minutes in those ever so heavy costumes! But they did, and as always, it was a lesson in how to get an audience to love them even more…Pearl Bailey gave them the extra 10% more after giving them the first 100%. It never failed. Even when
she had to wear “slippers” (pink) all through one show because of shots in one
of her feet she needed. OR, the night she had to have drops put in her eyes and
did the entire performance in dark glasses. The famous 3rd Act
always went on.
The only exception was the night Dr. Martin Luther King Jr. was assassinated. Fans loved it and came back again and again knowing they would be
further entertained after the show was over with Pearl Bailey doing a tap dance
around the passarelle with Cab Calloway singing Won’t You Come Home, Bill Bailey? 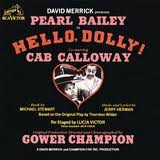 Lucia Victor, of course, directed this production and it
couldn’t get any better than that. Marky only met Jerry Herman once. He gave
her a charm bracelet which she still cherishes to this day.
The first time she
heard the entire score was at the first rehearsal and she was instantly
smitten. There is no way that the title number can’t work. It is the entrance of
all time…in RED…not to mention music by Herman. There Cornelius Hackl was Jack
Crowder who later changed his name to Thalmus Rassulala, He had an incredible
voice and stage presence. Thalmus Rasulala (November 15, 1939 – October 9,
1991) was an African American actor who starred in Blaxploitation films. He
also was an original cast member of ABC's soap opera One Life to Live from its inception in 1968 until he left the show
in 1970. Their Barnaby Tucker was Winston Dewit Hemsley.  He was a fabulous dancer. There were no pep
talks needed from Lucia. They were so high energy all the time. She knew at the
first rehearsal this was going to be a great Dolly! Marky loved their stage manager, Frank Dudley. At one time,
he was married to Lucia Victor prior to Dolly in 1963. They were now divorced
but continued to work together.
When they closed on Christmas Eve 1969, they were even more
magnificent than when they opened on October 11th, 1967 at The
National Theater in Washington, DC.
Marky Bey (now Fenwick) says she can do Hello, Dolly for the
rest of her life. This show is such a part of her life’s history as a young adult
that she treasures and holds close to her heart…and she can’t imagine any
female in any company of Dolly not desiring to grow up and play the role of
Dolly Gallagher Levi! Marky Bey has earned the right.
Beginning
in 1984 with a MagicCruise to Alaska, Don and Marky Fenwick have been producing
"common interest", or themed cruises for over 25 years.
Utilizing their skills as entertainers and
organizers, the Fenwicks produce four or five various cruise/conventions each
year, including a StampCruise (with the American Philatelic Society), MiniCruise
(for miniaturists), and Murder Mystery.
Don writes all their Murder Mysteries, and Marky utilizes
her many talents in creating  the clues
used by the detectives of the Mystery Cruises. Check out their website.