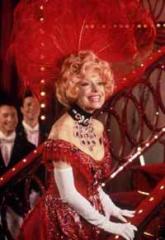 If they didn’t have two follow spots pick her up, when she dropped
the newspaper, she would be upset, so they ran two at half intensity. She was
happy with that. When they went to one at full intensity, she was upset. They
learned her thoughts on lighting and would proceed.
Quite honestly, it was
Carol Channing in Hello, Dolly! You
have to keep the star happy. Whatever tricks he needed to do that, he did.
Ken also saw Ginger Rogers as Dolly. She was
a glamorous movie star on Broadway. He doesn’t know if she was good in the part
but she was glamorous. The one thing he does remember is that her microphone
was in her cleavage in her dress.
When she came out during the curtain call to
take her bow, she would put her right hand up over her chest so you wouldn’t
see the microphone and take her bow. He remembers that very clearly. He doesn’t
remember much more. He also went to the closing night performance of Ethel
Merman.
Ken went with a producer friend of his, Peter
Bridge. They were in the last row of the orchestra. The houselights went to
half and the audience started to cheer. 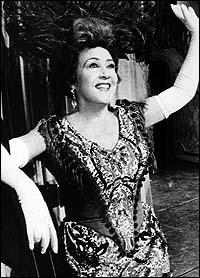 Ken knew it was going to be a great
night no matter what happened. Out of the horse cart, everyone is moving
sideways so it looks as if the horse cart is moving at the same time.
Four
people went across and Gower Champion was in the middle of it all doing the
dance across stage. That was the only time he was seen that night, by the way.
Ken has done Broadway shows that were much
bigger than Dolly. He would put his production in the standard size of a
Broadway musical. At the St. James Theater, where Dolly originally ran, the
back wall from the curtain is twenty seven feet, six inches. That isn’t very
big. Some people’s living rooms are longer than that.
It is not a lot of room
to get a lot of scenery. By the time you get the scenery in, where do you put
the lights? Dolly was probably a good
size musical for its time.
Dolly fit into the Lunt-Fontaine Theater more
easily, because the theater is deeper. There was also no problems on the tour. 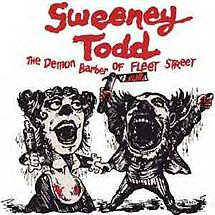 Ken loved doing this production of Dolly.
He loves
this period and style of musical. It’s what he was raised on. Ken is also the
guy who designed Sweeney Todd so he understands all of it!
Opening night, he is standing at the back of
the house and at the end of Sunday
Clothes and everyone is standing on the train, and hanging off of girders,
and magenta and yellow and turquoise costumes, it was wild. Ken thought,
“That’s the end of an era.” It doesn’t exist anymore. As beautiful and
wonderful as it was, it isn’t what is done in the theater anymore.
Ken has always dealt with stars. He knows how
a star works. Carol was difficult at times, not unreasonably so. Charles Lowe
would always diffuse any situation that got out of hand.
There was a terrible evening with Carol one
night. Ken went to see the show. It had been running on Broadway for about a
month or so. The show was great. It was just like opening night. Ken saw Thomas
P. Carr, the stage manager, and told him the show was in great shape. Thomas told
Ken he must tell Carol. Ken walked backstage just as the curtain was coming
down. He went over to Carol to tell her so. Thomas said to Carol, “Ken’s here.
He saw the show tonight and thought it was wonderful.” 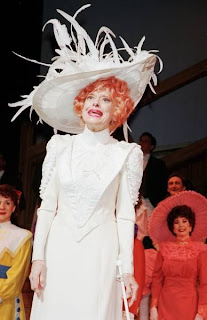 She had decided that it
had been a bad show. There had not been a lot of reaction. She also had a cold.
She proceeded to yell at Ken in the middle of the stage like he had never been
yelled at in the theater in his life. The stagehands were standing there with
their jaws down. She was on such a tirade. When people are that angry, you just
let them go. There is nothing else you can do. She said he didn’t know how to
light a star, he didn’t know how to light people, he didn’t know how to…
The
show looked great. It was a bad evening for her. Ken just happened to get the
brunt of it all. She said, “We just need good old lighting designers.” This was
Ken’s sixth Broadway show. It wasn’t like he was new at this. He just let her
go. Thomas tried to pull her off of Ken basically. She wouldn’t have any of it.
Charles Lowe saw what was going on.
He intercepted. Carol said, “I was just
telling Ken he doesn’t know how to light comedy.” Charles looked at Ken and
said, “You know, Ken, George Burns said you can never have too much light for
comedy. Now, Carol, let’s just go off and visit your guests”, and he led her
off. Ken did get an apology the next day. Where do those things come from? They
happen. It had nothing to do with Ken or the lighting. 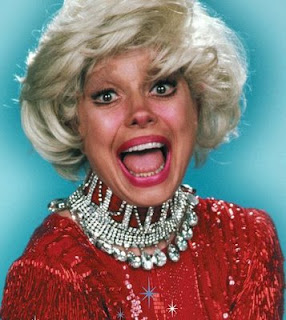 It had to do with the
fact that she had a cold and a crappy audience that night. Ken knew that.
Ken has never seen that many other Dollys
except for the first class productions mentioned here. He has never seen an
amateur or stock production of it.
Hello,
Dolly has brought a lot of people to the theater over the past almost fifty
years.
It’s nice entertainment. It works and it does everything it was meant to
do. It makes you love the theater. It’s tuneful. It’s colorful. It just has all
of the qualities that a sixties musical, which was a good period, has. Ken
worked on all of the productions of Mame
worldwide, another sixties musical of a period with a glamorous star and
costumes and great production numbers. You don’t necessarily see that anymore
which is why Ken loves doing the Encores at City Center. 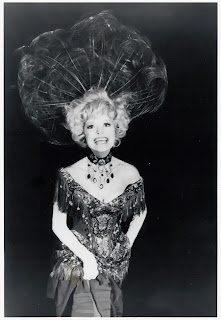 You get to see these
types of musicals you don’t get to see anymore.
Ken has done a lot with Jerry Herman. He also
lit Jerry Herman’s Show with Lee Roy Reams and Florence Lacy on Broadway. Jerry
is brilliant. He knows what the public likes and he writes tuneful great songs.
He is the eternal optimist and is such fun to have in the theater. Ken also did
a concert version of Mack and Mabel. He
loves the theater. He loves musicals. He loves the whole event. He’s like a kid
in a candy shop. Boy, should everybody be like that. His love of theater is so
obvious and it comes through in all of his musicals.
Even the ones that weren’t
so successful are full of optimism and hope and joy in his music. With a Jerry
Herman musical, what more could you want?
The first time that Ken heard one of the
songs from Dolly, it was Louis Armstrong’s rendition of the title song on the
radio.
The Hello,
Dolly number comes at the right time and place in the show. The curtain on
Act Two opens and builds with anticipation with Elegance. Everything continues to build with The Waiter’s Gallop. Then there is a page of dialogue with waiter’s
running around and shouting, “She’s coming!” they’re running and jumping, “She’s
coming!” more running and jumping, and finally, “She’s here!” With that kind of
anticipation, how could it not work?
A lot is not written about the Horace
Vandergelder of this production, Jay Garner. Jay was great. He totally made it
work.
Ken knew this was going to be a great Dolly
his first time in the rehearsal hall.
Ken also did the Ethel Merman/Mary Martin
concert on Broadway. They recreated the Hello,
Dolly number. It was May 15th, 1977. It was one of the great
evenings in the musical theater. Mary Martin and Ethel Merman, two of the
greatest musical comedy stars of the twentieth century doing a benefit. Cyril
Ritchard was the emcee. The overture was divided between their hits. They then
alternated number after number. Nobody was top billed. When you flipped the
program, it reflected that.
They opened Act Two with the Harmonia Gardens
set from the original Oliver Smith design with two staircases. They were both
standing at the top of each staircase. The
Waiter’s Gallop was performed by the leading male stars appearing on
Broadway at that time, Reid Shelton, Yul Brynner, Mayor Beame among them. There
wasa a chorus line of male dancers, but the crossover of all of the waiters
announcing Dolly’s arrival were all celebrities. 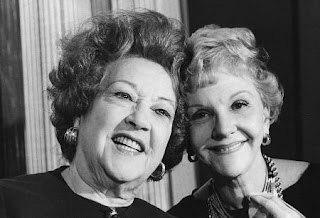 The curtain went up to reveal both
Dollys and they both came down the stairs wearing the Dolly gown. Lucia Victor
came in to stage it with the original orchestrations. They got to the bottom of
the staircase. They sang to each other and when they sang, “It’s so nice to be
back home where …”, they looked at each other and then looked out as they sang,
“I belong!” There was no passarelle. They did, however, perform the whole
number. It was truly one of the great moments of Ken’s life in the theater.
Ken would absolutely love to do Dolly again if the opportunity presented
itself. He doesn’t know who out there could do it now. She should be at least
forty years of age.
Hello,
Dolly for Ken Billington was his learning about the theater. He was in high
school when he first saw it. He fell in love with it and thought, “Isn’t this
lovely? This is what musical theater is supposed to be.” It’s supposed to be
all that color and all that joy and all that happiness and when you leave the
building, you are uplifted. He thinks that is something we should all aspire to
and look back to. Why did it work? How did it work? More shows should look at
that.