In all honesty, Jack’s relationship with Hello, Dolly! is
not as close as others I have interviewed. He was a publicist, in fact, an
apprentice to the Association of Press Agents and Managers (ATPAM).  At that time, the sixties, Jack was working
for what was New York’s busiest and most prestigious press offices, run by Lee
Solters and Harvey Sabinson. I have already written about Alan Eichler who also
worked in that office.  Jack began work in
that office in 1965 during the Carol Channing engagement of Dolly!
The press agent that was assigned to the show
during the show’s run was a wonderful man named David Powers.
David represented dozens of Broadway shows over a 40-year
period. He died in 2009. He had the privilege of handling all of the Broadway
Dollys…and their egos.
Jack recalls the first time he heard the score of Dolly! He purchased
the cast album and played it when it first came out. The first time he saw the
show was with Carol Channing starring. 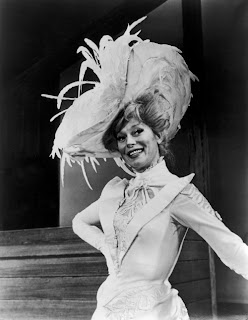 It was standing room.  He was absolutely knocked out by the score. He
loved it so much. The originals are so wonderful, Charles Nelson Reilly and
Eileen Brennan and Jerry Dodge and Sondra Lee and of course David Burns, not
that he does that much on the album.  Whenever
he hears those songs, no matter who is singing them, that’s who he hears,
especially Carol Channing.
Jack had nothing to do with Dolly…except one night. It was
the opening night of the Pearl Bailey Dolly. It was November 12th,
1967. Harvey Sabinson, who was Jack’s boss, asked him and a couple of other
guys in the office to assist him with Bailey’s opening night.
He put on his tux
and headed to the St. James Theater and met Sabinson in the lobby. They greeted
all of the celebrities who came in. When Channing arrived with Charles Lowe,
Sabinson introduced Jack to Channing and told her that he had asked Jack to
take her back to Bailey’s dressing room as soon as the curtain came down.
There
would be photographers backstage to capture the two Dollys. Channing looked at
Jack with those big saucer eyes and said, “Honey, I am as blind as a bat, especially
in the dark. At the end of the curtain call, just put out your hand, I’ll grab
it, and we’ll run.” Jack assured her that he would be right there.
The show ran
without a hitch with Jack standing in the back of the house enjoying it. The
curtain came down and Miss Bailey’s “third act” was longer than would become
her norm. Jack felt sorry for the chorus who just had to stand there and endure
this. They had to look interested as they had to do every night.
The whole Pearl
Bailey routine including “My feet are killing me.” Cab Callaway then performed Minnie the Moocher. This went on for
what seemed like forever. After a huge ovation, and just before the house
lights came up, Jack rushed down the aisle. He put his hand out to Channing,
gave his name, and they RAN up the aisle, across the orchestra, to the little
curtained off area stage left, which led up to backstage. Dolly’s dressing room
was stage left. It is the largest dressing room at the St. James. David Powers
was there to stage the photos with Channing congratulating Bailey. The next day
that photo was in the Daily News and the Post and ran on the Associated Press
photo wire. It appeared in many newspapers around the country. 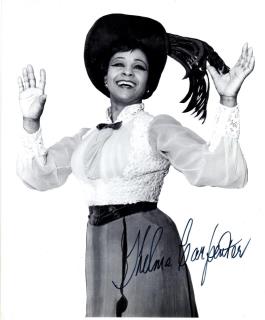